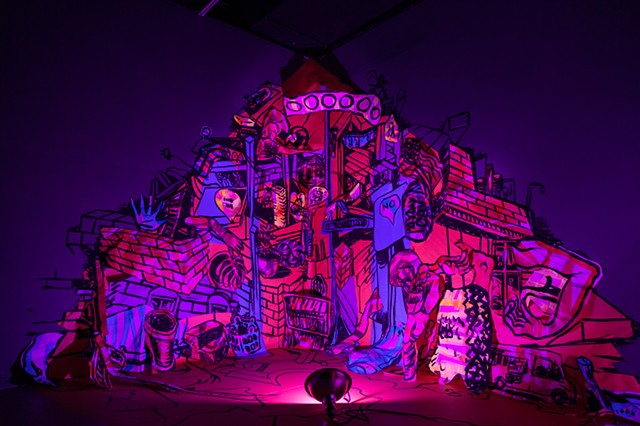 I make drawings and large, site specific installations which are also drawings. The former ink and water media works often begin as anecdotal moments either recorded or observed as I explore the city around me, and frequently evolve to enfold idiosyncratic personal iconography that emphasizes the darkly comic and absurd. The latter are motivated by similar concerns. They are (usually) composed of hundreds of quick, gestural acrylic and flashe paint sketches made with a fat brush that are then cut and collaged onto both built armatures and the existing surfaces of a space; these are sometimes further animated with embedded lighting. The effect is somewhere between a comic book and a stage set.

My work has been exhibited widely; selected venues include the Volta Art Fair (Basel, Switzerland), the Delaware Contemporary, the Smithsonian Anacostia Museum, the Aldrich Museum of Contemporary Art, the Berman Museum of Art, the Toledo Museum of Art, Artisphere, the Urban Institute of Contemporary Art, the Cranbrook Institute of Art, Benrimon Contemporary (NYC), Bridge Gallery (NYC), Christina Ray Gallery (NYC), Dorsch Gallery (Miami) and GV/AS Gallery (Brooklyn, NY). Regional venues include the Creative Alliance, School 33, the Silber Gallery, the Julio Art Gallery, the Gormley Gallery, MICA, d center, the Stamp Gallery, Maryland Art Place, Hamiltonian Gallery (DC), Arlington Arts Center (DC), Visarts (Rockville), Hillyer Art Space (DC), and Transformer (DC). I was an artist in residence at the Embassy of Foreign Artists, Geneva, Switzerland, in 2015, at the Swatch Art Peace Hotel, Shanghai, China, in 2016, and at Paper Machine, New Orleans, LA, in 2018. I have been the recipient of a Rubys Grant (2014), a Creative Baltimore Fund Award (2014), Individual Artist Awards from the Maryland State Arts Council in 2010, 2013, 2016, and 2019, and have been named a Sondheim Prize semifinalist in 2012, 2013, 2014, and 2019. My work was featured in the 2016 South edition of New American Paintings. My artist book "Rage Faces" (2016) is part of the collections of the National Museum of Women in Art and the New York Public Library; another artist book, "Quorum Call", was published by Antenna in 2018. A graduate of Harvard University (BA) and Yale University (MFA), I am now a Professor at Towson University.